If you are looking for an intense, first-person shooter game that actually puts you in the middle of the action, Killzone 3 for PS3 is it! Despite its vacant storyline, Guerrilla brings to the table a refreshing game that is fast-paced, savage and one you won’t want to put down. Sleep? What’s that? Forget about walking away from Killzone 3 until it’s done!

It’s almost unfair to thrash the game for its weak storyline because so many other features make you forget that what you are playing is pretty much meaningless. Killzone 3 is your typical good vs evil story yet it jumps around enough to fool you into thinking that there’s actually some depth there. Sorry, there’s not!

The ISA is on one side, as you can guess, they are the human characters and tragically predictable, they are the good guys. On the other side, you have the red mask-wearing Helghast. These are the evil enemies who plan on destroying the universe. If you played Killzone 2, you will feel at home as soon as the game begins as Killzone 3 starts where the last game ended.

After the ISA soldiers have been stranded on this home-world belonging to the hostile enemies, they have to struggle to survive. Your character is Sev who you may remember from the game’s predecessor and your mission is to simply kill the enemy.

Chances are, if you buy Killzone 3, it’s not because you are searching to be fulfilled by a story anyway, right? As the game implies, you want to kill and there certainly is no shortage of that to complain about. The controls are tighter than any other shooting game you will find. You will feel momentum, follow through and completion, you are in the game! If this doesn’t help release built up aggression, nothing will. In fact, you will probably find yourself exhausted from combat. 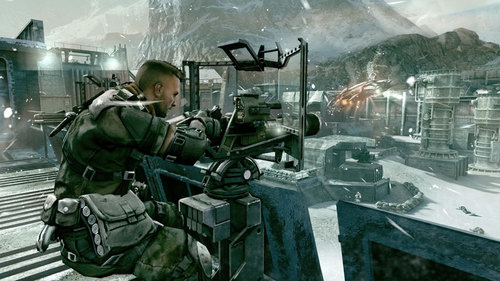 Every second of the game is intense. If you’re not shooting, you are probably climbing a ladder or driving some wicked vehicle, the game just never slows down from start to finish.

If you really want to find something to complain about, if you have the time to notice, the characters are awful. Truly pathetic. They offer no personality, emotion and you can always predict how your character will interact with others. That being said, if you are bothered by this, you’re probably not doing something right because there are enough other things to deal with aside from the fact that the characters are unlikeable.

Killzone 3 is so visually satisfying that you may want to let your neighbor play for a while so you can just kick back and enjoy the movie. Yes, the movie because that is what it looks like. The graphics are so ridiculously spot on that it’s hard, no, impossible to take it all in. This is by far one of the most visually dynamic games on PS3.

The environments are intoxicating and enemies are so realistic you will swear you can see and feel their heart stop beating when they plunge from a cliff. Guerrilla makes you believe just how ugly war really is!

The pathetic story and uninspired characters are merely pebbles, nothing you could even stub your toe on. While any other game would leave you feeling empty or disappointing lacking these qualities, Killzone 3 for PS3 just has too much going for it for these flaws to deserve a second thought. This isn’t just some generic shooting game, it’s a brutal killing experience!